previous
Epic Trailer For The World's End
random
next
Have You Tried Forcing An Unexpected Reboot? IT Crowd To Return! 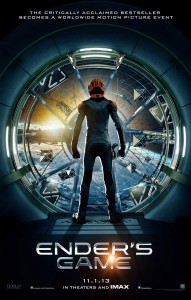 Following the success of Lord of the Rings, Harry Potter, and Twilight, it seems Hollywood is forever in search of the next big literary franchise to adapt and extort. As the sequel to The Hunger Games releases in November, it will be accompanied by another first in a potential series.

Ender’s Game is based on the 1985 sci-fi novel of the same name, as well as the later written parallel novel Ender’s Shadow; both part of a long running and highly successful series by American author Orson Scott Card. The trailer released yesterday and can be seen below.
Set in the distant future, mankind struggles to survive constant onslaught by an alien race known as the ‘Formics’. As the next invasion approaches talented children from across the globe are drafted into an advanced military school in the hopes of finding the next great fleet commander. We follow Ender Wiggin (Asa Butterfield), a tactical genius set to follow in the footsteps of legendary hero Mazer Rackham (Ben Kingsley). Ender and other potentials must compete in various games that could well dictate the fate of humanity.
With a striking look, solid cast, intriguing characters, and an epic sci-fi story, Ender’s Game is promising. If X-Men Origins: Wolverine director Gavin Hood pulls off this first film, we could have a blockbuster franchise with long-term substance and wide appeal.