At 6pm on the 25th of May, The CW Arrow megastar Stephen Amell hosted the 2nd London based fundraiser for his charity of choice and patronage, Fuck Cancer (www.letsfcancer). 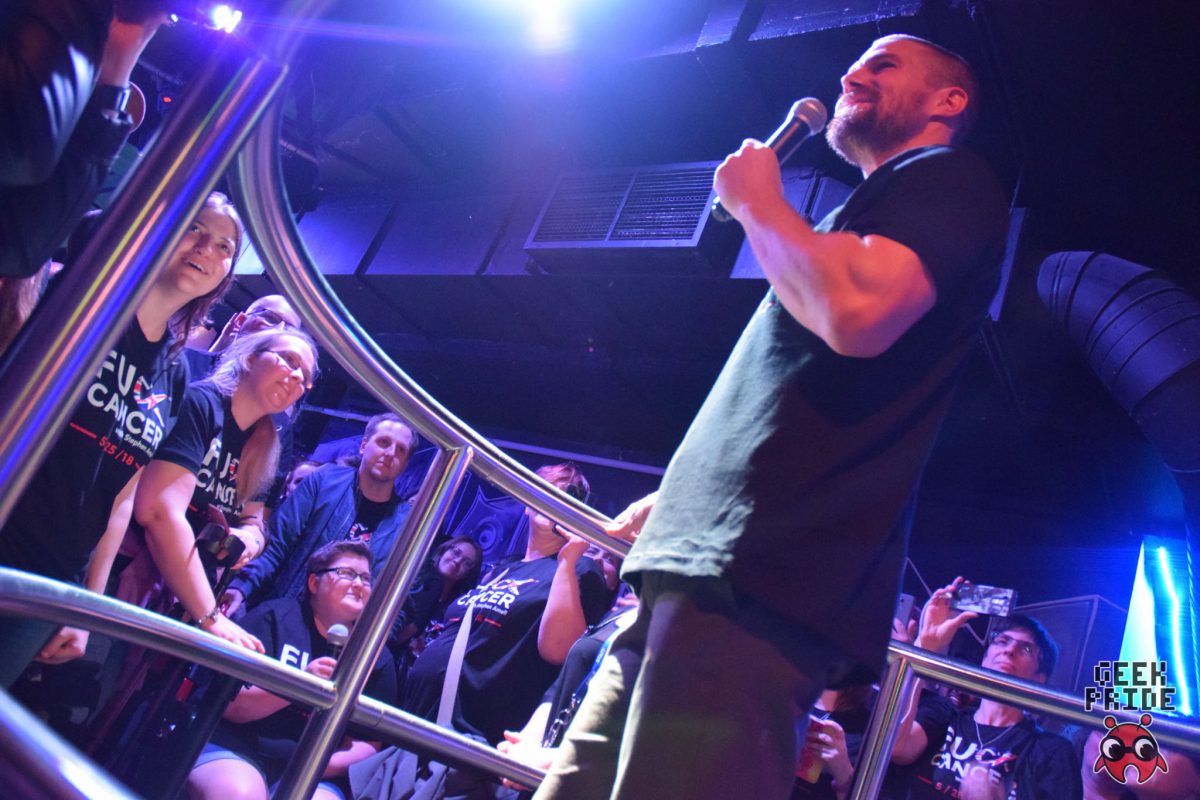 Like the previous event held a year ago, the venue was a prestigious London nightclub called the Piccadilly Institute, located in the very heart of Piccadilly Circus.  It was all very impressive upon first glance. Any fan of the actor after learning of an event hosted by such beloved celebrity and in such an impressive location, would be willing to pay for entry.

Sadly, impressive at first glance is probably the best way to describe the event. Fans swarmed to the venue, climbed the dark and cramped stairwell to collect their exclusive “Fuck Cancer” t-shirts. (Condition of entry was for participants to wear this shirt, a requirement that combined with a lack of air conditioning inside, led to overheating and discomfort for many attendees.)

The venue is advertised as an “eclectic” venue and to a degree this is correct. The rooms are oddly set out with the mannequins hanging from the ceiling. Like any nightclub, the atmosphere is very dark, paired with strobing lights and music so loud, it is almost impossible to communicate.

For someone on a night-out with friends, looking to dance and drink, this is the perfect setting. For a charity event with fans hoping to see one person, this is a less then ideal venue. The fans waited in tense, bored silence, crowded around the podium they expected Amell to soon occupy. After an hour of waiting in this hot, unfriendly atmosphere the main star arrived.

The nights star, Stephen Amell came out of a backroom for a brief 10 minutes and made conversation with a small group of fans before being ushered back behind the curtain.

After a tense wait, the event was ready to begin. First up, a local artist presented her work, dedicated to the cause and gave a speech about her motivations for creating the piece. Awkwardly however, this either ran overtime or was a last minute addition to the nights events as it transpired Amells mother (Sandra Anne Bolté ) was waiting to surprise him with a birthday cake, complete with loud sparkler fountains, that could be heard over the speech and then had to be replaced and relit as the artist was rushed off stage. 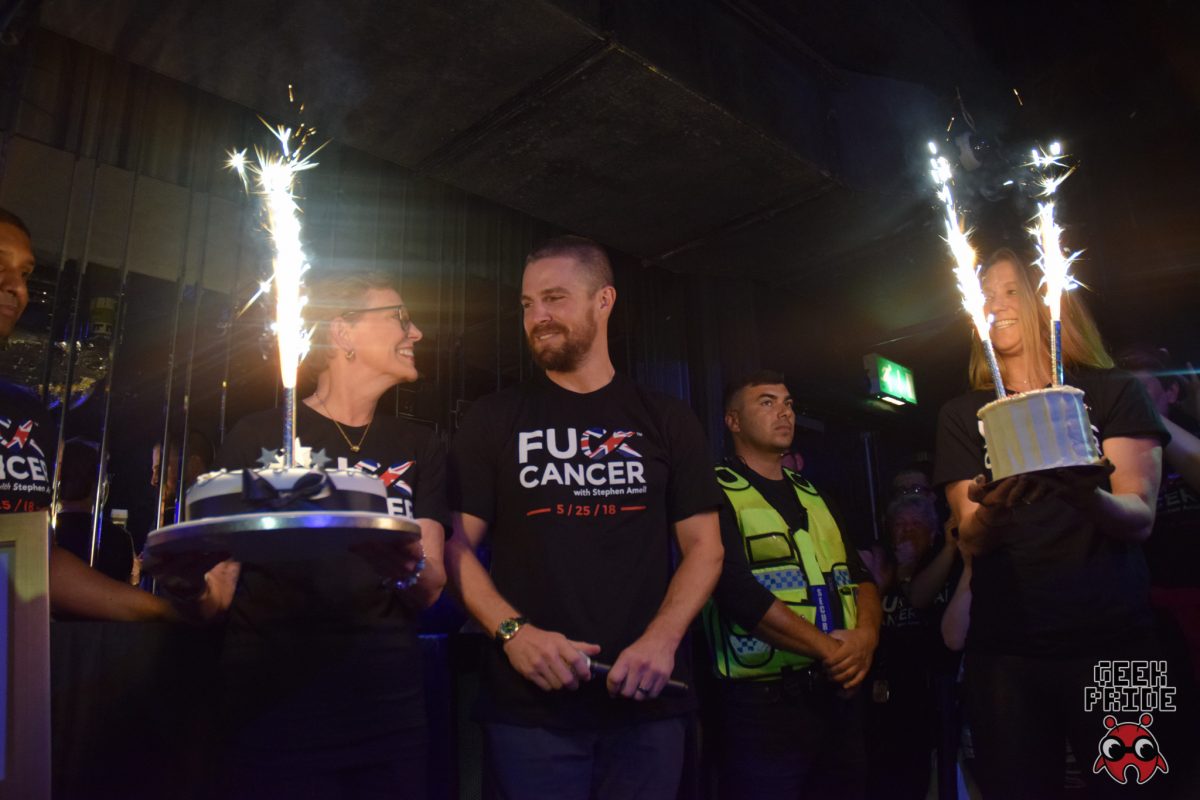 Two cakes were then gifted to Amell along with a birthday message from his mother. The assembled crowed then sung the traditional Happy Birthday song. The star was unsurprised and said as much, however the affection towards his mother is obvious and provides a humanising moment for a man often put on a pedestal by fans.

The cakes cleared, Stephen Amell took the stage, on a dancers platform of some sort that he protested being placed on much to the amusement of those watching. He then proceeded to talk about the charity, a basic history and welcomed the crowd. Following this was a Q & A Session with the fans, making it clear he wasn’t going to spoil anything from the next season of Arrow. The questions asked were fairly standard questions. For example “Can you do an impersonation?” Or “Can I be on the show?” and “Do you prefer action scenes?”. The question Stephen seemed to enjoy the most was “Whats the worst advice you have ever been given?”. The answer being “Don’t be an actor”. Clearly he ignored this advice and has becoming highly successful. His mother then briefly joined him on stage to be given a gift and hear a story of a fans personal struggle with cancer. 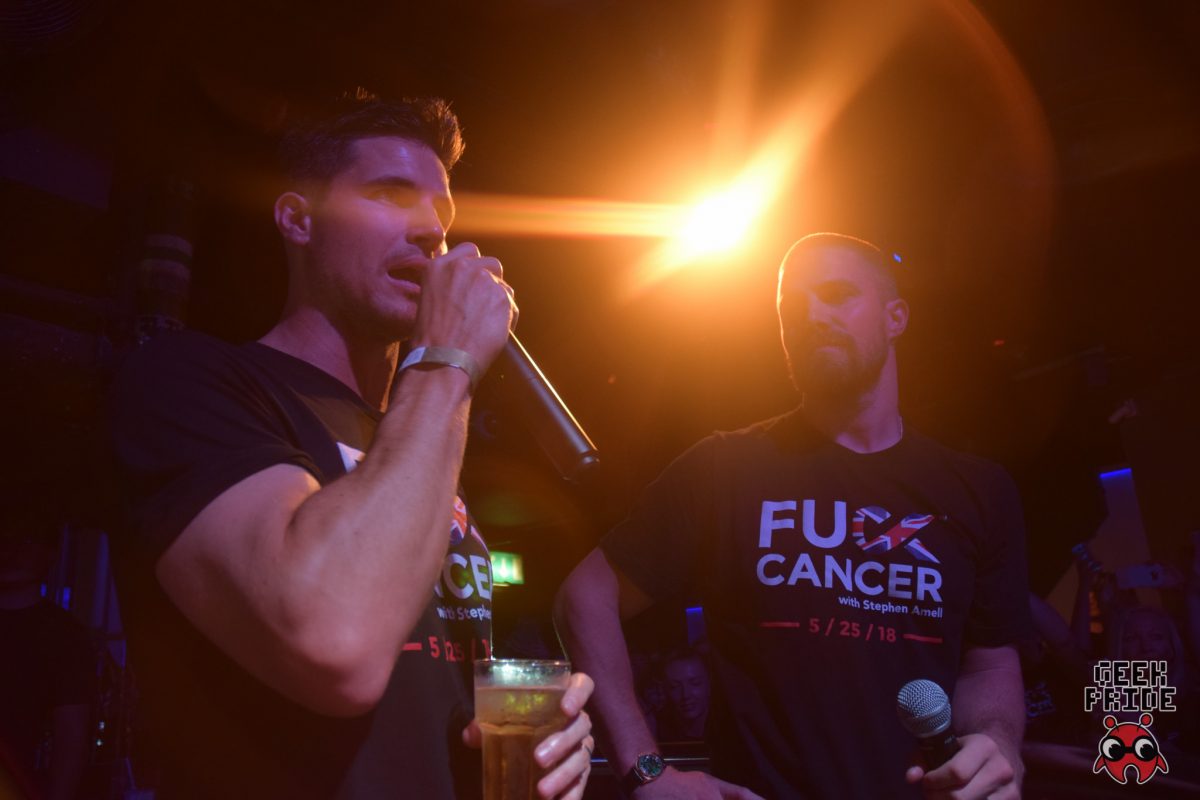 A question posed about his cousin and fellow CW Alum Robbie Amell, had the actor in question joining Stephen on stage to talk about the duo’s upcoming Kickstarter project “Code 8”) A shared a moment of gentle family ribbing followed before Robbie left the stage.

More questions followed before the show was wrapped up with the signature “Fuck Cancer” group photo. Featuring Stephen Amell, Sandra Anne Bolté & Julie Greenbaum (Charity founder) and the gathered attendees behind them.

The Amells and company proceeded to the VIP room to spend time with each other and some fans who had paid a premium price to be included. The music got somehow louder so conversation became difficult. Despite this, Stephen took the time and effort to record a little message for our Podcast, regardless of the loud music.

This was pretty much the end of the event. Not long after the stars left, the main area had cleared of 50% of the attendees and was quickly on its way to shedding more. Many fans were then seen outside getting food and drinks from other establishments and wandering home, Fuck Cancer shirts proudly displayed!

In conclusion, charity is always a worthy goal, however more thought could be given to the needs of the fans attending. While a few lucky souls at the front got a chance to meet the man, most did not. This event lacked the ability for people to converse, meet new friends, socialise and perhaps share their own stories of strength. The length of time with the star and questions asked were no more unique, interesting or personal than what would answered at the Arrow panel, which happened over the next two days at the Heroes and Villains Fan Fest event.

For this event to really attract more attendees, donations, sponsorships and support discussion and change, the organisers need to have a discussion about more effective ways to make this an experience for the Geek community to really rally behind and flourish in.

Check out photos, taken by Laura below