By: Brittany Gurkin aka TheWookie 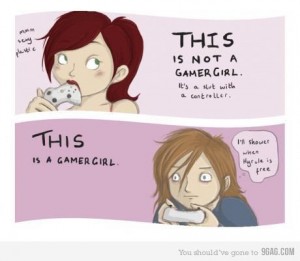 As a female gamer, I have heard it all from Gamer guys when it comes to insults. Today I’m here to clear a few things up.

Now there are some girls out there who have ruined our image on live games online. I have had to kick girls out of clans for using their practice time to “sexy chat” with guys and for sending nudes or inappropriate behavior at expos.

If you are a gamer born in the 70’s or 80’s like me, you’ve likely been playing video games since you were old enough to hold a controller…. ATARI SHOUT OUT!!!

What I find to be the most difficult thing about being a female gamer, is that I ave been a sponsored player for years and have always played fairly and with just as much passion and skill as my male teammates. Do I get as much respect as them? Not even close. During photo ops, I’m stuck off to the side. During intros, I’m last to be called. When I defeat a male player, he can’t just shake my hand and say, “good game” as I always do.

Gamer girls are not a figment of the imagination but the light cast on us is disgusting. We are just as likely to be experts at playing a game as any male gamer. We do not put on makeup and dress up to play a game thinking that you can see us. Likely we are sitting in our rooms, just like you, in our pajamas or “lazy clothes,” just like you. And we most certainly are not thinking, “Oh good a guy who plays. I hope he sends a picture of his junk to me.”

We just want to play the games as much as any male gamer does. Women are cast in such a light in the gaming world that girls actually do obscene photo shoots for gaming magazines just to entertain the males. I could go the rest of my life without seeing another fake gamer girl in lingerie holding a controller with bedroom eyes. That is not a gamer girl. That is entertainment for small minds.

A real gamer girl doesn’t care if you think she’s hot or not. She cares about gaming. She does not care how good you are at the game, just play already and stop asking about sandwiches. Have some respect and remember that most of us are old enough to remember Pong.

What you get to miss out on when you are dick to girls when gaming, is that most of us are decent team players and you could lose a great asset to your team. Entire clans are out there of nothing but female gamers. Talk crap to us about our gender is low, at least talk crap about crappy calls or the same mistakes you make. We all are online for the same reason, to play a game and kick some ass. Let’s just all get along and stop with the stereotypes.

I could get into the stereotypes that are out there about gamers in general, but that would get us no where. Now go forth and set a good example for the next generation of gamers.

Brittany Thornton aka The Wookie, lives on the majestic islands of Hawaii. A mother of two up and coming geek daughters. A Whovian, a Tolkien lover, a Trekkie and obviously a fan of Star Wars, you'll usually find her on XboxLive, playing Destiny and getting killed... a lot. Want to win her over? Books, bring books. Food helps too.
You might also like
ataribreakingCOD