Paramount Pictures has revealed a new trailer and a new character poster, for Michael Bay’s upcoming Transformers: Age of Extinction, 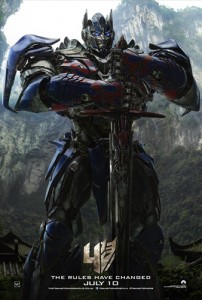 which for anyone who doesn’t know, is set to feature the Dinobots.

This is a new era of sorts (as one of the characters says in the trailer, I see what you did there Paramount) with no Sam Witwicky played by Shia LaBeouf and the lynchpin of the previous films.

This film is set to feature Mark Wahlberg as mechanic Cade Yeager, who unwittingly discovers a beaten and broken down Optimus Prime in a junkyard. Reviving Optimus drags Yeager and his daughter Tessa, played by Nicola Peltz, into a chain of events involving Autobots, Decepticons and shadowy government agents.

The question is will this, the 4th film in the franchise, erase the horror of the last two films or will it just be yet another display of mindless “Bayhem” with big explosions and indistinguishable Transformers fighting at the expense of anything resembling plot, story and logic?