On the morning of Saturday 25th May, the first day of the UK May bank holiday weekend, I was quite happily playing on my PS3 while my Wife was out for her usual gym visit and supermarket trip, until the sun decided to shine ever so brightly, obscuring my view of the TV; this was sign that I should put the controller down and get outside, but where would I go? I could go for a bike ride or a walk through the local park, but then I remembered seeing a video on You Tube promoting a new retro video game store in London. I looked up the address and found that it is in Streatham, South London; which is over an hour away from my North London home, but I was very curious to see what it’s all about and thought that it would be great to tell you all about it, so I jumped on a train and when I got there, I found myself greeted by this stunning sight: 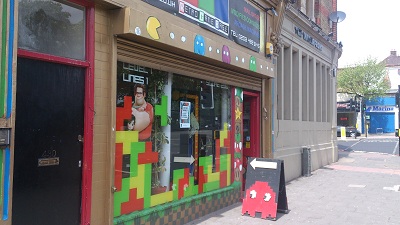 As soon as I walked through the door, I thought I had died and gone to gamers’ heaven; there was so much taking me back to my childhood and I didn’t know what to look at first. For a small shop there was plenty crammed in there; shelves were stacked to the max with games for most formats and buckets full of loose carts for NES/SNES and also the imported famicom versions. All of the most popular Sega and Nintendo consoles were there in abundance, as well as a few clone machines (some play both NES & SNES or NES & Megadrive), an Atari Lynx, a Vetrex, Amigas, ZX Spectrums, a Game & Watch and Grandstand machines, just to name a few. They also had a few consoles set up to a CRT TV (Sonic 3 was running on demo mode while I was there).

It’s not just a place to buy old games though; they have a number of  retro coin-op arcade machines you can play on including Street Fighter II and a Neo-Geo arcade cabinet with various titles; some of these machines are set to free-play. They also hold in-store events from time to time, such as arcade sessions and tornaments, complete with a licenced bar. Details of these events can be found on their Facebook page here.

Here are some photos I took during my visit:

There really isn’t anything else like this (in London anyway); sure, there’s the odd game shop, which has a glass cabinet with a few N64 and SNS carts, but they specialise in current generation games and consoles, which you won’t see any of in RGB. You can also find many of the items RGB sells on various online stores but to the best of my knowledge,you won’t find a physical store like this.

If you would like more details on the store and some of items they stock, you can find them on their website here.

Finally, here’s the TV show pilot they released on You Tube recently:

I'm a 35 year old, self-confessed media junkie from London. I currently work as a tester in digital media (some say I get paid to watch telly) and also worked as a games tester in the past. I also spend a lot of my spare time watching films and playing video games. Thankfully I have a very understanding wife, who allows me time to do so.
You might also like
breakingGamingRetro Consoles