Surely this is a golden age for fans of big heroes on the big screen. Only recently has the SFX technology and budget for superhero films caught up with the larger-than-life storytelling, curtailed only by the writers imagination and the artists skill. Rewind only a few years and the hardcore Marvel fan could force themselves to wince through David Hasselhoff as Nick Fury (1998) or the 1990 Captain America film. Even newer attempts like Daredevil (2003), The Punisher (2004), Elektra (2005), Fantastic Four (2005) and its diabolical sequel have left fans with more to moan about than to celebrate.
The last few years of huge budget blockbuster Marvel films have been a saving grace in comparison to all the previous near-misses but many are still apprehensive about the newest Xmen cinema outing. They needn’t be. It is going to be awesome and this is why. 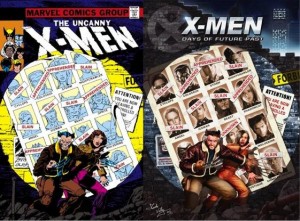 Chris Claremont has written many of the classics of XMen lore. The Wolverine (2013) film was based on one of his tales and gives the hard-nosed, thick-skinned Canadian a little more depth than we are used to seeing. Published in XMen #141 and Uncanny XMen #142, Claremont’s ‘Days of Future Past’ is an epic tale of time-travel. The first part was rated 25th in Marvel fans’ top 100 comics of all time. The story has gained cult status, being referenced and later ripped off in Heroes.

Kate ‘Kitty’ Pryde, now an adult in a dystopian future, must travel back, inhabiting her younger self to warn the XMen of the future that awaits them. The film seems all set to have Wolverine doing the time-travelling but y’know, he’s pretty cool, so I won’t be picketing my local Odeon (interestingly, Bishop took Kitty’s role in the 90’s XMen cartoon series) . In this future (dubbed Earth-811) mutant-hunting Sentinel robots have apprehended or slain many of our favourite Marvel mutants. It is now up to the younger XMen (McAvoy, Fassbender et al.) to prevent the tragedy that sparks worldwide anti-mutant prejudice.

The choice of storyline should be enough to interest the XMen comic fans but will it impress the fans and critics of the previous films? The cast list alone should be enough to impress anyone. The ‘Sirs’ of the franchise, Patrick Stewart and Ian McKellen, are fan favourites that ground the cast-list with their impressive acting credentials. Hugh Jackman has made the role of Wolverine his own in much the same way as Robert Downey Jr. is Iron Man. James McAvoy and Michael Fassbender gave impressive performances in ‘XMen: First Class’ and many of the cast from the XMen Trilogy and ‘First Class’ have returned. 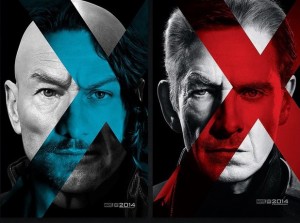 The majority of actors from the XMen film franchise so far have returned, adding many more mutants to the roster. These include Blink, Warpath, Sunspot, Quicksilver and Havok. The cast list has filled out nicely (almost with Lady Gaga playing Dazzler…it was an April Fools joke) and many worry that there will be too many names to remember and inter-character relationships to establish. This must have occured to the Director,Bryan Singer. He has experience with the XMen films and many of the actors and he is said to have consulted both Chris Claremont about the original text and James Cameron about time-travel, string-theory and multiverses!
With six previous films establishing the characters and their varying traits, those invested in the XMen film legend will no doubt find this an interesting blend of both sets of familiar faces. Singer has clearly looked to develop the ‘First Class’ cast so their characters seem closer to those portrayed in the XMen Trilogy saying that Mystique (played by Jennifer Lawrence) will be closer to herself in ‘X2’.

I would have time to despair for those who are watching ‘Days of Future Past’ as their first XMen experience, as setting up all these characters for first-time viewers seems an impossible feat, but I cannot pity anyone that gets to see Peter Dinklage as Bolivar Trask! Peter Dinklage has risen to fame as Tyrion in the recent TV adaptation of Game of Thrones, widely loved as the Lannister family’s anti-hero. The promotional shots of him in Trask’s trademark moustache and scowl are reminscent of J.Jonah Jameson, Peter Parker’s editor and renowned Spiderman hater. In short, the surprise casting of Dinklage as the cantankerous, mutant-prejudiced Trask was an excellent surprise. Bryan Singer is aware of this, announcing Dinklages involvement long before confirming him as Trask and setting up a Trask Industries website (www.trask-industries.com) to tease fans.

If anyone has seen The Wolverine and left before the mid-credit sequence, they have missed the (SPOILERS) inclusion of a bemused Wolvie staring at a Trask Industries TV ad and the return of the original Magneto and Proffessor Charles Xavier (Patrick Stewart has assured fans that his demise in ‘The Last Stand’ and apparent revival will be explained).

This has all the makings of an excellent crossover film. I would wait patiently for the release date (23rd May, 2014) but as Wolverine says in the teaser trailer, “Patience isn’t my strong suit”. 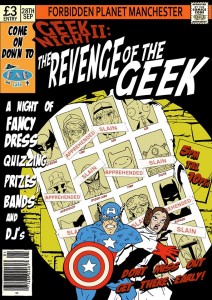 Owen was born with a S.N.E.S controller in his hands and now works in a comic book shop and pretends to be a pirate on occasion. He has an unconditional love for the works of Joss Whedon, Felicia Day's face and Leek and Potato Soup.
You might also like
anna paquinbreakingBryan Singer